The kids and I were talking about how slow motion video works the other day, so I was happy to see this new video from Phil Edwards detailing how the technique works and its history in cinema, from Eadweard Muybridge to Wes Anderson and from Seven Samurai to The Matrix.

I am an unabashed fan of slow motion; you can check out dozens of slow motion videos I have posted over the years, including this video of Alan Rickman dramatically drinking tea. 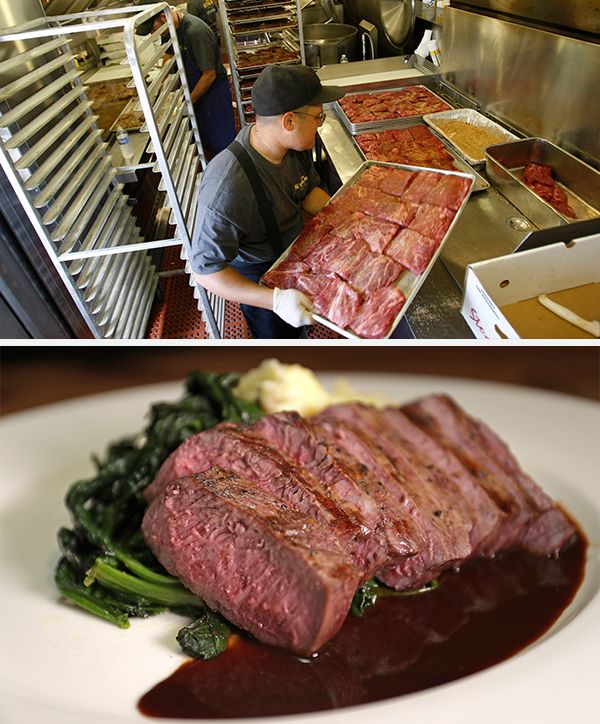 Some people don’t really pay attention to how a meal was cooked, let alone to how that particular meal was discovered. Did you know that the flat iron steak began as an experiment? It was a result of an experiment in a meat science laboratory in 2001, as The Hustle details:

In 1998, the National Cattlemen’s Beef Association — the industry’ largest trade group — gave a pair of meat scientists $1.5m in grant money and a seemingly impossible mandate: Find a new cut of meat that centuries of professional butchers had missed.

Three years later, the world was introduced to the flat iron steak.

In its first several years of life, the flat iron steak — a very thin, very tender cut from beneath the shoulder blade of the cow — topped 92m pounds per year in sales, about as much as the porterhouse and the T-bone steak combined.

Back then, it was rare to see a new steak enter the market. The flat iron became a proof-of-concept for the industry — and it left the beef titans craving more new cuts.

image via The Hustle

With time to burn during ye olde pandemic, practitioners of a musical genre called bardcore have been taking pop songs and medieval-izing their lyrics and tunes. The three examples embedded above are Radiohead’s Creep, Jolene by Dolly Parton, and Paint It Black by the Rolling Stones. Here’s how Creep starts off:

When thou wert here before
I could not look thee in the eye
Thou art like an angel
Thy skin makes me cry
Thou float’st like a feather
In a beautiful world
I wish I was special
Thou’rt so very special
But I am a creep
I am a weirdo
What in hell am I doing here?
I do not belong here

Wikipedia and most of the news articles about bardcore date the genre to April 2020, but I found a cover of System of a Down’s Toxicity from 2017 and a medieval cover of Metallica’s One from 2014 by Belarusian band Stary Olsa, which released a whole album of medieval covers of classic rock hits in 2016.

For io9, Eleanor Tremeer digs into the complex and sexist legacy in Star Trek’s progressive universe. From Uhura on, Star Trek has always pushed the boundaries of how women were portrayed on TV, particularly in science fiction, but in some aspects, the shows have also been undeniably sexist.

With Yar gone, the women of The Next Generation fit more snugly into classic feminine molds, as Marina Sirtis reminisces. “They got it right, they cast a woman as the security chief. But Denise left, and the two remaining women were in caring professions. So it was ok to be on a spaceship as a woman, but you had to be a nurturer.” Speaking to io9, Gates McFadden (Crusher) is scathing about the few times the women would be thrown together, not to work together, but to gossip. “If the ladies did have a scene together we were dressed up in leotards talking about men. We weren’t sharing opinions on a medical issue!”

Over the ensuing years, Troi and Crusher would slowly get more screen time, as their characters became more nuanced, but they would rarely get the chance to break out of their nurturer molds. And with Crosby gone, security chief wasn’t the only position that needed filling. “I was never supposed to be the chick on the show, the va-va-voom. That was supposed to be Denise,” Sirtis told us. For as progressive as Star Trek tried to be with its women, every show has something in common: There has to be a hot chick.

To understand why this was the case, you have to look behind the scenes and at who was making the casting and plotting decisions.

If the entertainment industry is dominated by men now, this was even more the case decades ago. Star Trek has had a few female writers and producers over the years-DC Fontana wrote for The Original Series, The Next Generation, and Deep Space Nine; Jeri Taylor got her start producing The Next Generation before co-creating Voyager, to name just two immensely influential staffers. But, as Sirtis points out, Star Trek was a franchise created by men: “Even though we were writing a show about the 24th century, apart from Jeri Taylor and Melinda Snodgrass [another writer], the writers and producers were all men. Twentieth-century men. So it’s not gonna be that far-reaching.”

We could argue, of course, that Star Trek was a product of its era, but the actors were aware, at the time, that the show could be better. This aggravated Gates McFadden, as early as season one of The Next Generation, as she revealed to io9. “I wondered, did the women exist for the men to react to? Even Wesley just reacted to his mother, not seeking out her counsel-for counsel he sought out the men on the ship.” Coming from academia, McFadden was used to a collaborative creative environment, but she didn’t encounter that behind the scenes of The Next Generation. “Jonathan Frakes could bound into the producer’s office and put his feet up, but I couldn’t. That wasn’t acceptable.”

I’m rewatching The Next Generation right now and have been paying a lot of attention to how the women on the show (both the recurring cast and various single-episode characters) are portrayed. There’s definitely improvement after the first season or two, but there’s just so much on the show that’s off and obviously written primarily by and for men.

Anyway, if you’re a Star Trek fan at all, you should read Tremeer’s whole piece.

If you’ve been wondering about the risk of contracting Covid-19 while performing common activities vs. the risk of doing stupid shit, XKCD has you covered. I feel like “getting a dental cleaning from a Tinder date” should have been much more high risk than its position on the chart. 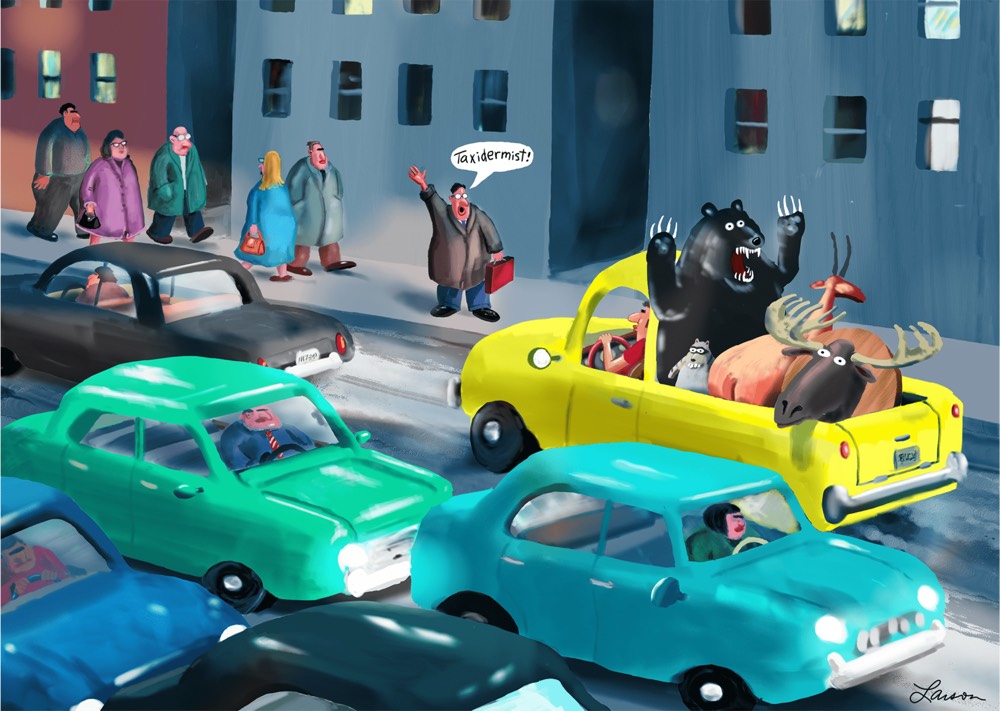 In 1995, after his massively popular single-panel cartoon The Far Side had run daily in newspapers for 15 years, cartoonist Gary Larson retired at the top of his game and scarcely a peep has been heard from him since. Until recently. Back in September, Larson launched a website for The Far Side with a daily archival cartoon. But then yesterday, Larson revealed that he’s been working on some new stuff with “a digital tablet” (likely an iPad).

The “New Stuff” that you’ll see here is the result of my journey into the world of digital art. Believe me, this has been a bit of a learning curve for me. I hail from a world of pen and ink, and suddenly I was feeling like I was sitting at the controls of a 747. (True, I don’t get out much.) But as overwhelmed as I was, there was still something familiar there — a sense of adventure. That had always been at the core of what I enjoyed most when I was drawing The Far Side, that sense of exploring, reaching for something, taking some risks, sometimes hitting a home run and sometimes coming up with “Cow tools.” (Let’s not get into that.) But as a jazz teacher once said to me about improvisation, “You want to try and take people somewhere where they might not have been before.” I think that my approach to cartooning was similar — I’m just not sure if even I knew where I was going. But I was having fun.

There are only three new pieces so far, but I’d guess more are on the way. The new stuff is more painterly and definitely has that drawn-in-Procreate feel to it, but the Larson’s trademark humor is very much in evidence.